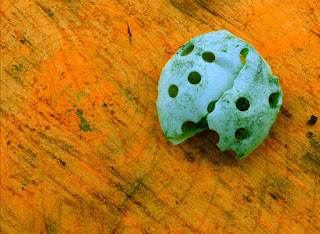 Ball on stump, ball without chain, broken wall washed up and left to dry on stump, This is the resting place for this rolling ball. It's waiting for the next gust of wind or human interaction to set it in motion. We would strongly recommend it be anchored to this piece of wood so that it doesn't move.
Ball is made to move. That's why it has a rounded form. If it was meant to stay in place it would have square sides. Even if anchored down, the earth rotates and orbits through space.

Stump is at the root of the Stumps family name. Lohbado's birth name was Peter Stumps. His family tree could be traced back to 16th century France, to a man by the name of Leo Pourris, later changed to Pierre la Souche, then anglicized to Stumps. The name Stumps implies potential. A stump remained after a monumental tree was cut down. The stump is a fertile womb for new growth, first saplings, then eventually another mighty tree to do justice to the original tree which was cut down and nearly forgotten.
Posted by Lohbado at 11:42 AM