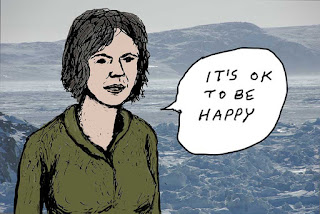 Suffering is easy. The big question: do you have the courage to go beyond suffering and to be happy? Is there a virtue to being unhappy? On a practical level, people often become jealous and resentful when a person has good news, but secretly happy when the person has bad news. It's a strange psychological phenomena. So no wonder there's the temptation to conceal one's happiness, since that could open oneself up to attacks from harmful or jealous demons. Not being happy benefits nobody. On the flip side, happiness could be contagious. When a happy person walks in, radiating good vibes, it could cause others to cheer up. Lohbado realized there's no need to feel bad, even though he sometimes got the impression that people preferred to see him feeling bad. It requires a bit of confidence to be cheerful. There's a lot of stormy psychic waves out there. Lohbado decided to be happy, but to proceed quietly so as not to annoy anyone.


As an anecdote: the other day as Lohbado was exiting from the metro station, a man gestured to a mentally ill man seated on the ground at the bottom of the escalator and announced in a loud voice of disgust: "That man does nothing but eat and sleep..." He made some verbally abusive remarks. Lohbado told the man that the person in question was a human being and furthermore, the man was mentally ill. It made no difference. The high and mighty man didn't want to be proven wrong in his moral assessment that the ill man was subhuman. Lohbado didn't say another word.

He wondered why the man would insult a human being. Verbal abuse is aggressive, extremely hurtful and only increases aggression. So why do some people feel it necessary to insult poor people who struggle and do the best they can? Just because they have problems and didn't succeed doesn't mean they're not human. As humans, they have the right to be happy. It's ok for them and everyone else to be happy.
Posted by Lohbado at 9:25 AM