Dr Jane Wormsly and Lohbado at the Busy Bee Motel 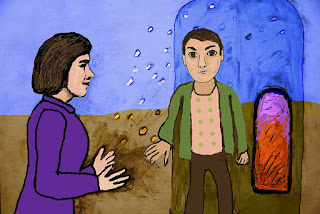 We need to do a ritual. The ritual begins with beautiful talk and anticipation, said Dr. Jane Wormsly one night as she and Lohbado met at the Busy Bee Motel to reconnect with joy. Together they enjoyed warm cozy comfort and ecstatic intimacy or blissful intermingling.

“I will initiate you into the mysteries of the Bee Hive,” said Jane, as Lohbado gazed at a mauve note pad on the bedside table, where Jane had scribbled a few ideas after they entered the room half an hour ago, before they showered and changed into silk gowns. Jane wrote with a 24 karat Sailor fountain pen and caput mortem ink. Deep red ink showed up nicely on mauve pad.

She’d written a few words about an arched old yellow brick alcove where voyeurs met in the shadows. Apparently from a certain angle one could see directly into the Seven Mysteries Yoga and Astral Carpet Sacred Gong Studio.

One afternoon Jane on her way into a thrift store saw a back limousine pull up. An older man with long silky white hair and a long white silk scarf and black linen suit got out. A sporty young uniformed chauffeur held the door and guided the old man to a bench in the alcove. Apparently some pervert from the Goo-Goo Underground published a series of special interest guidebooks for people willing to pay for it.

So anyway, the beige brick alcove was on the list of scenic lookouts for voyeurs. I know this is sick. I apologize if you’re squeamish. It’s part of my research into the psychological impact of brain parasites, said Jane, as she snuggled up to Lohbado.

They positioned pillows so they could sit up in bed and enjoy a glass of wine before beginning their lying down and flailing about dance. Sexual deviation, the elegant old man stood in the alcove. Well, I’ll leave the rest to your imagination. But I want you to promise me you won’t turn out like that. Lohbado promised.

The dance and yoga participants must have known about the voyeurs, said Jane. If this is too sick, please let me know and I’ll stop. I’m only telling you this because you asked. I believe they were closet exhibitionists. Some people get turned on by the thought of being watched and secretly admired.

The scarlet wine was a bit funky, but quite stimulating. A clot of mucous choked Lohbado. He coughed up a bloody red pudding.

That’s the cleansing effect, said Jane. Your body ridding itself of toxins.