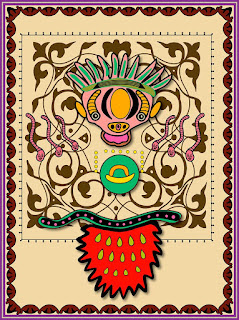 Peter Stumps, the birth name of Lohbado, never forgot the moment when Miss Kate Gong, his grade two teacher, in 1963 showed him anger like he’d never seen before.

Names meant a lot to him. Peter means stone, a stone on which to build a church. If her name had been Miss Clap or Miss Glockenspeil, he might have turned to music instead of speculation. Gong was like an invitation to the temple. Mr. Ham was never far from Miss Gong. She liked Mr. Ham, the grade 6 teacher, Blair Ham, bacon, eggs and ham.

Kate Gong and Blair Ham Glock clapper wooden mallet marimba bongo xylophone, Blair Ham will bongo your mind with wooden clapper trap. Miss Kate Gong taught Peter stumps the complexity of anger, after he broke the rules. She told him to stay after class. He sat in the front row. She stood before him. He didn’t understand at the time, the implications. It made a huge impression. Even at the age of sixty-two he thought about it, an involuntary memory, the 12 inch wooden ruler, clap trap Miss Gong and Mr. Ham and eggs on toast. His offence: he'd gone into her desk to see what grade she'd given him on his report card.

The incident turned into a speculative exercise, something about the ruler, a strip of wood off the old tree and how it made a spanking slapping sound on the oak desk. The dark wood grain lines of the teacher’s desk reminded him of the black leather-upholstered chair of his father, Rev. Stonehenge Stumps.

Peter triggered anger in the bottom drawer of Miss Kate Gong. He put a finger on it. She caught Peter Stumps red handed in the bottom drawer of her desk, when he should have been out playing with the boys at recess. Instead, he received a memorable lesson about the complex nature of rage in all its existential glory and eroticism.

Miss Gong radiated hot rage. Rage brought them together, emotional intimacy, no filters, raw passion from deep within. He basked in her heat, which offset her cold marble eyes ready to roll out of her head. He felt close, like she would to take him to her breast, a suckling. He imagined his face resting against her old breasts. Latching on to acorns, a smell of forest, musty green comfort of nature, something growing from the stump, sucking vitality from a root penetrating deep into fertile soil of the past, a long venerable tap root, source of the Stumps family tree going back 250,000 years to Neanderthal and Hominoid.

The incident became part of his personal mythology, a piece in the puzzle, a camel pizzle, humph humph a camel plodding methodically, footsteps across coral pink dunes in a dream. The groan and grumble of the camel, he fantasized about riding a camel with Miss Gong, she in front, he with his arms around her waist. She guided the huge noisy plodding beast until they both felt like sand.
Posted by Lohbado at 4:58 PM