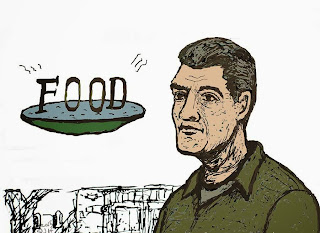 Using a recent digital application, authorities are able to determine and measure one’s daily diet and excretion. The quality and quantity of bodily substances will be cataloged and used as an apodictic or matter of fact portrait of your attitude and way of life. This approach is based on the saying: what you eat is what you are.


The Department of Regulation mandate is to proclaim an official concept, determined by the Chief of Regulation, which you are to follow. The Chief of Regulation decides what you will believe. Think whatever you like; just make sure you put forward the right attitude. Unbelievers or any show of dissent or desire to question or modify will not be tolerated. Should you persist in critical thinking, you will be put under surveillance. All bodily functions will be observed.

The Push Button approach at the Department of Regulation, after the Apocalyptic War, only made sense according to the truth or falsehood of the reality to which it applied. It’s one thing to talk about the vanishing nature of each moment; but do you actually believe it?

From habit, one tunes out the transparent nature of time. The mind spaces out or gets swept into a habitual blur. One mistakes the blur for reality. Sometimes people become hostile when someone points out the ephemeral, empty nature of the blur.

On the Plains of Radiation, Lohbado took photos of bricks, cement fragments and chemically discolored soil. He carried a compact camera strapped to his belt and a mirrorless camera in his pack. Every time he took out his camera, people would look at him in suspicion. Taking photos in public, unless selfies or LOL friends was viewed as a potential danger, a threat to administered normality.

(note: Lohbado wrote this text while reading a chapter from Theodor Adorno's  Dialectique négative)
Posted by Lohbado at 1:02 PM