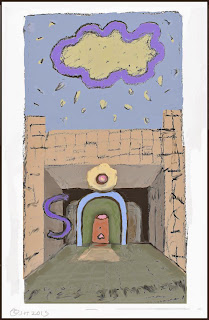 What was Socrates doing in the temple? Why did he go there? What is the meaning of S and O, the first two letters of his name? From the little he read of Plato, Lohbado got the impression that Socrates had enough leisure to stop in wonderment and contemplate the nature of existence. His search for knowledge and wisdom gained momentum after consulting the Oracle at Delphi. "Know thyself" was carved in stone at the temple of Apollo at Delphi. The oracle told Socrates he was a wise man. Socrates found it wise to not pretend to know what he didn't know. He often would say that he didn't know. This leaves philosophical questions open for exploration and discovery, unlike know-it-alls who feel they don't need to listen, read or learn, because they already know it all.

The temple of Club Morono is a place of peace and quiet, plus song and dance. At the temple, one could supplicate wisdom and sanity, confess, rejoice and tune into the sacredness of being. Clear away the veils of conflict and aggression, ignorance and insatiable hunger, grasping and fixation. Why not be a dignified, compassionate, kind and loving human being, instead of going out to clobber people who get in the way, or focusing purely on obtaining money and material things?