up against a dream wall 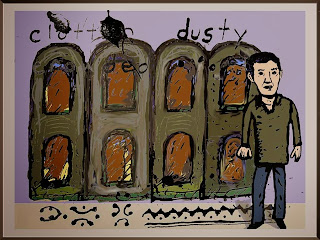 Lohbado in a dream woke up in a dusty, cluttered room. Voices asked him: "Who are you? Where are you? What are you doing?" Lohbado was unable to answer. He left the room, strolled into a public garden and sat by a granite pool surrounded by oak trees and relaxed.

"While inside, a lot of nonsense clogged up my mind. Under a clear sky, it's easier to let go. Tension melts from the body. Worry dissolves. There's no need to be anyone doing anything, other than to do whatever has to be done," said voices in the garden.


What is the origin of worry? Internalized voices indicated something was wrong. The judgement of voices represented moralistic authority. Without even noticing, Lohbado had absorbed a set of unexamined moral habits, for example, one must always be busy. One must make oneself useful. Hurry before something terrible happens. These internalized scripts he used to criticize himself and to criticize others. Where did the authoritarian voices come from?

He was born into family, in a society conditioned by a giant mind control mechanism generated by the ruling class. A system of punishments and rewards let him know when his behavior was approved or disapproved. If he cultivated a certain attitude and behaved a certain way, he would receive candy. If he began questioning assumptions, he risked being scolded, shunned, silenced or given rotten potatoes. Santa gives the bad boy and bad girl a lump of coal. The good boy and girl get a sugar plum. As he relaxed in the garden, Lohbado realized he'd done nothing wrong. He bore no malice towards anyone, He wished that he and all people could enjoy happiness.

Of course, it's not that simple.  Many factors, such as accident, natural disaster, social upheaval or war are beyond one's control. Maybe freedom is not much more than a limited set of options to choose from when one is up against the wall. One's thought and behavior reflects biological, economic and social considerations. One will be more likely to graduate from a fine university and start up a business if one is from a wealthy family or has wealthy backers than if one is born into a ghetto to a single mother addicted to drugs and a father in jail. Often the mind is cloaked in confusion or self-defeating mental habits. Maybe one is very attached to oneself to the point of feeling more important than anyone else. The moment one tries to have power or control over others, suffering increases. Desire, greed and insatiable appetite sometimes torment and obscure the mind. If one behaves in a selfish, aggressive manner, speaks harsh words and has an agitated or drowsy mind, one is more likely to experience conflict and disharmony than if one cultivates compassion, wisdom, patience, generosity and discipline.
Posted by Lohbado at 10:00 AM