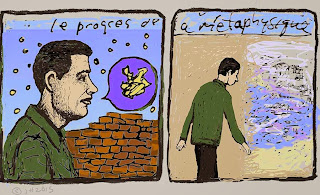 Lohbado pondered the nature of existence as he crossed the Plains of Radiation. Each moment occurred and vanished. Each perception was coated in personal preferences, like, dislike or indifference. How much did he actually notice while navigating through a typical day?  Most of what happened went on without him even noticing. Often he wasn't even aware what was in front of his eyes. He was often oblivious to the sounds. Sometimes he walked in a daze, spaced out, lost in thought or sunk into drowsiness. Meanwhile, each moment vanished and new moments occurred. He was getting older. One eventually becomes a corpse.


Metaphysics is a term from Aristotle referring to after physics. Knowledge begins with the senses. Perception is sorted out in the intellect, which analyzes things and creates concepts or general notions and definitions to aid one in navigating through life. Some of the concepts are quite limited, obscured with naive opinions and strong emotions. Sometimes rays of intelligence and awareness pierce through the clouds of self-centred thinking. With clear thinking, one could go beyond self-absorbed opinions and cultivate understanding, compassion and ethical behaviour. If one could relax, let go of personal filters, see what's there and pay attention, affliction would diminish. It would reduce aggression, which is usually based on an attempt to proclaim oneself and one's opinions, without regard for how anyone else feels. With a bit of wisdom and compassion, the world might become a better place.
Posted by Lohbado at 8:25 AM