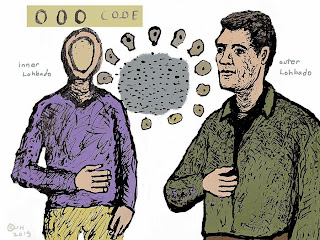 After a day of particularly difficult terrain, Lohbado arrived at an empty plywood shack. It was closed, but not locked. The ethic of the trail... use the cabin but leave it the way you found it. Don’t leave trash behind. Lohbado gave thanks in his mind and heaved a sigh of relief as he opened the door and saw a neat oil drum stove, a plywood bed with a mattress and blankets on top. There were also pots and pans, matches and some kindling.

It was getting a bit cold, not much above freezing point. Lohbado set his pack by the bed, took off his coat, removed his boots to air out his feet and put on a pair of sandals. He squatted in front of the door cut into the side of the metal barrel and made a fire. He went to a stream flowing near the shack and filled a pot of water. There was a fair bit of silt in the water. It would settle to the bottom after he let it sit for a while. He put the pot on the fire. It’s good to boil water from the stream for about five minutes before drinking.

He stood in the doorway, his shoulders sore from the weight of the pack, his legs aching. The last stretch across a boulder field was exhausting. He had to test each footstep to make sure the rock was stable. A few months ago, he stepped on a loose rock and fell head first on the ground. Fortunately, a strap on his pack hooked a rock, which prevented him from banging his head. On the Plains of Radiation, you’re on your own. One false step, one injury and you could be in serious trouble, no rescue. The infrastructure collapsed during the Apocalyptic War. One survived by one’s wits. You were on your own. It was up to you to find enough courage, discipline, patience, cheerfulness and clear-headedness to keep going. Lohbado took refuge in nature. He felt comfort in contemplating the elements. He understood how before the days of modern civilization, the landscape appeared alive and seemed governed by myths or supernatural forces.

His friends from before the war would roll their eyes in contempt at such ideas. Maybe the ideas seemed irrational at the time and yet no amount of reason was able to prevent the tragic and unnecessary war that nearly wiped out civilization. For all their reason, the nihilistic materialists led the world straight on into disaster, even though there was no reason for such disaster to occur.

Lobhbado made herbal tea and wandered outside to watch the evening sun. He saw a band of blue to the north, a huge sea. He would arrive at the sea the next day. While gazing towards the horizon he felt grateful for being in good health and for having a mind not totally traumatized by recent events. He could still relax and be lucid sometimes. At such moments, he enjoyed contemplating the nature of existence and the strangeness of being somebody appearing to do something, the unusual journey from birth to death. His mind blanked out when he tried to understand why existence was happening. The question occurred in response to suffering. If life was all peaches and cream, maybe such questions wouldn’t even occur. He’d be having too much fun to trouble his head about the meaning of life, or about the cause of suffering.

Recently he began to feel growing conviction about the power and beauty of truth. No amount of aggression or confusion could obscure the vast and profound nature of being. That’s as far as he could say. Words reached a limit then imploded. At the moment when words collapsed... Lohbado gave thanks in his mind...
Posted by Lohbado at 8:09 AM