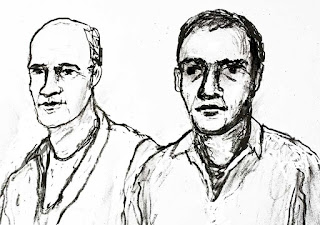 Lohbado’s apartment contained a kind of battered, abandoned or neglected book shelter. When people moved, relationships broke up, somebody died or someone wanted to get rid of books, they contacted Lohbado. Lohbado sorted out the books, separating the junk from the valuable. It’s amazing the amount of junk that gets published. Whole stacks of books, best seller today, worthless tomorrow. Lohbado donated them to book bazars or used book stores. They had no monetary value.

The rest he kept. He was able to read from one to three hours per day, depending on the state of his eyes. Once he reached sixty, after years of heavy reading, his eyes began to have trouble. He had to pause frequently. He experienced chronic eye pain. He read less and spent more time relaxing in the park, or by the river and canal.

Lately he’d been reading the works of Plato. Plus he always kept a few easier reading books on hand, to eat with a meal, or before going to bed. He recently began George Orwell’s Nineteen Eighty-Four. The power of the writing made him sit up and pay attention. A key incident occurs in chapter one as the lead character Winston begins a diary. Winston inserts a nib into the dip pen, opens the old notebook he bought at an antique shop and wonders why he’s writing (page 11). Then an incident comes to mind, which makes it clear why he’s writing. The incident took place during the mandatory Two Minutes Hate program which took place every day. During the gathering when crowd hysteria generated hate towards manufactured enemies, while participants declared their devotion to Big Brother, Winston made eye contact with O’Brien. In the instant of eye contact, they experienced intra-psychic communication, a flash of intelligence (page 19).

The process of sitting down to write was a vehicle for sorting things out, examining layers of reality and one’s situation as an individual in a society. Winston commented that writing would be a question of transferring to paper “the interminable restless monologue that had been running inside his head, literally for years. At this moment, however, even the monologue had dried up. Moreover his varicose ulcer had begun itching unbearably...” (pages 9 - 10). It’s both relatively easy, the act of recording thoughts, but also agonizing. The process has a powerful affect on his mind. No wonder keeping a diary was considered a “thought crime.” Thought crimes were flashes of intelligence that tore holes in the tissue of lies generated by the totalitarian state. In this case, the slogans are: "WAR IS PEACE/ FREEDOM IS SLAVERY/IGNORANCE IS STRENGTH" page 18.