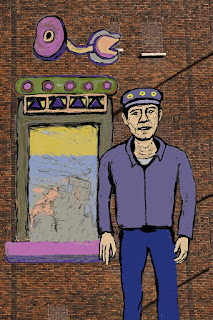 Before release, Lohbado underwent a week of debriefing, or mental reconstruction where agents did their best to break him down, to fragment his sense of identity in order to leave him in a permanent state of confusion. They provided Lohbado with a guidebook, containing rules of conduct and advice about decorum, plus suggestions on how to stay out of trouble. His body ached from the week of interrogation. Stress tightened the neck muscles and made his stomach burn. He trembled and felt dizzy in the blinding light of the back lane after they shoved him out the back door of the warehouse. The door was next to the metal loading dock set into a brick wall. It took a moment to get used to sunlight after a week of living in halogen light of a warehouse basement.


During the interrogation they played with his mind. They accused him of lying. They repeatedly said: “We think you’re lying.”

They tried to make him contradict himself. They put words in his mouth. They told him he said things which Lohbado knew he hadn’t said. The nerve-wracking ordeal nearly gave him a heart attack. His heart pounded so hard, the blood roaring in his head gave off a high-pitched hum. He could see stars. It felt like a dream. His voice sounded like it was coming from far away. He began to dissociate, an out of body experience. He floated above the red velvet armchair. They whipped him with peacock feathers and rubbed his head with a silk handkerchief. They blew bee-stinger dust into his eyes. It was forbidden to sneeze.

The pressure in his head reached a point where he thought a blood vessel would burst. And yet still they kept up the barrage of moronic questions. At one point their words scrambled into gibberish. He thought he was on the verge of going stark raving mad. He caught a terrifying glimpse of psychotic mania or mental breakdown. The pain made him nearly vomit. He gulped back the vomit that rose into his mouth. They warned him not to vomit. If he violated their code of life he would be severely punished.

It took a few moments as Lohbado staggered down the back lane after being released from the warehouse to realize he was free. He would no longer be interrogated. He was no longer of interest to the Minister of Regulation. He was free to do anything; but it was forbidden to talk about the Dome. Everything that took place in the Cha Region of the Poh Valley in the Secret Desert after the Apocalyptic War was classified information. To reveal it would be considered a security threat. It could land him in hot water. Things would get worse than he could ever imagine should he speak about what happened in the Dome. Obviously, everyone knew about zero zero zero and the alphabet.

During the debriefing he was given an authorized standard version to tell, the official story. Of these things he was encourage to speak. But they knew from similar cases the best thing would be for him to be quiet and invisible, to act like a patriotic, mutilated non-person, a standardized human being, restless, dull, bored, without curiosity and devoid of cultural appreciation. He was given an allowance and encouraged to go shopping for gadgets of distraction. Get hooked up to computers and android devices. His only responsibility was to stay alive, because suicide was still considered taboo.