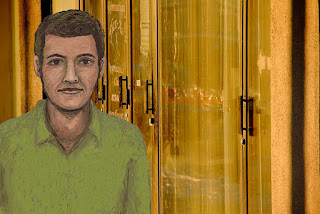 Lohbado lay down for a nap after eating a plate of spaghetti. He dreamed about standing in front of brass doors, which appeared golden in the afternoon light. During his nap, he reflected on a discussion about the advantages of justice and injustice from Plato's Republic. According to Socrates, an unjust person won't find true happiness. To attain true happiness involves being just. What is the nature of justice?

A character at the beginning of book 2 suggested that anyone given the chance to act in an unjust manner for personal gain would do so. He uses the fable of a man with the magic ring that enables him to become invisible. This enables him to make love to the wife of the ruler, to scheme against the ruler. Given the opportunity, the man went all the way to obtain pleasure, wealth and power, as opposed to acting in a just manner.
Posted by Lohbado at 1:36 PM