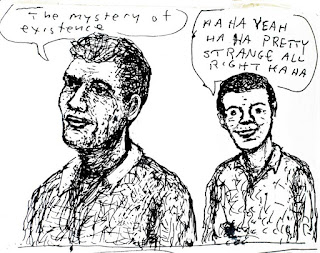 Contemplating existence inspired Lohbado to keep going. This is a story, fiction, not nonfiction. A funny middle-aged man woke up one morning and wondered what the fuss was all about? He laughed as he thought of yesterday. The thought of tomorrow filled him with dread and anxiety. There’s the eternal platitudes of the eternal now. How would you like to dwell in the here and now?


Unfortunately, the moment now occurs, it becomes then. The earth is moving. As soon as you say you’re here, you’ve already left. You’re somewhere else. Lohbado got out of bed, went to the kitchen. Later he went for a walk. His body moved from one place to another. His mind filled with thoughts, millions of atomic perceptual inputs flooded his senses, created sense impressions which gave rise to images or representations, plus mental associations, emotional response and concepts.

When Lohbado’s outer life became increasingly stark and bleak, he found strength through turning inwards, looking at his body and mind, contemplating the nature of thought and being. A set of concepts or ideas moved about like a musical composition in his mind, thought melodies, conceptual chords, repetition, a chorus, the nature of time and space, the nature of self, identity and ego.

Lohbado found no concept to summarize all that there is. He experienced being as a process without beginning or end, other than the relative reference points of birth and death... the trajectory of one among seven billion people on an ancient planet. His ambition was to cheer up and not sink into debilitating despair, to overcome the agony of being born into a situation where one is compelled to survive, for no clear purpose other than to do what one does because that’s how it is... Underlying the survival situation was an anxiety, the agony of being in a body, of being conscious, of being compelled to perform bodily functions.

Lohbado’s finite life within the infinite, the process of thought, so fast, most thoughts barely noticeable... The nature of being somebody involves eating, breathing, sleeping, seeking clothing, shelter. One interacts with others, a whole set of relationships, arrangements, contracts, rules, protocol, decorum, procedures. You’re stuck on the wheel of life. The world was here before you were born and will continue after you die. etc etc etc....