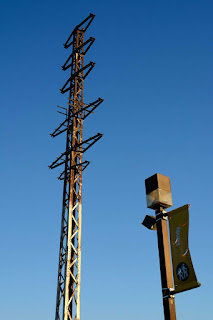 It's soothing to look at the water. The motion of waves made Lohbado think of the movement of his mind. His mind waves mixed with the waves of water as he relaxed. After a while, he got up and gazed at metal towers against clear blue sky. It felt like a burden was lifted from his shoulders. He could breathe without coughing or choking on anxiety and claustrophobic thought loops.
To be affected by things going on around and in turn to have an effect, Lohbado contemplated the dreamlike transition from one situation to the next, the flow of people and sounds. As he sat on a park bench, the sound of sneakers on a gravel path, someone jogging, brought back memories of nearly 40 years ago. He used to wake up early to meditate near a window before breakfast. Every morning he heard the sound of sneakers on a gravel road, someone jogging.
Posted by Lohbado at 9:36 AM