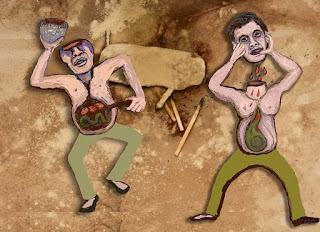 A circle dance the letter Oh or Zero and everything, the whole and the parts the letter O is a circumference, or line composed of infinite points, with space inside and space outside. The opportunity to do the dance or prayer in motion, an aspiration to break the chain of claustrophobic ignorance passed down from one generation to the next, is about as rare as a turtle rising to the surface of the ocean and putting its head through a ring of hair. The dance requires a sense of humour, the ability to learn from mistakes and a desire to not be swept away in the fury of confusion.

It’s ok to make mistakes. Each mistake could be a learning experience, if one’s ego is not too big. Sometimes ego prevents one from learning. Ego could use a variety of defences, such as denial, rationalizing, blame, minimizing... Ego could protect itself with a cloud of strong emotion, for example, anger. Get angry. Blame somebody for mistakes one can’t admit having made. This perpetuates ignorance. In such a state, one is condemned to repeat mistakes endlessly and to feel miserable, while blaming others, blaming this or that, getting angry, making excuses, coming up with conspiracy theories, anything to avoid accepting responsibility for one’s mistakes. Ego doesn’t like to admit it could be wrong.

If ego gets out of the way, then mistakes aren’t the end of the world. One goofs up, says the wrong thing, has an accident, makes a foolish decision. One could apologize. Aspire to not repeat the mistake. Learn from the situation. Smile and move on. A sense of humour is essential. Ego has a habit of taking itself way too seriously. After all, ego is an illusion made of endless thought loops, internalized messages and self-imposed commandments. When one catches a glimpse of the situation and is able to see through the clouds, one could let go of ego and be a bit more kind and reasonable. Ego in itself is not a problem. It’s attachment to ego, or making it into a seriously big deal that creates suffering.

Attachment to ego creates suffering in so far as it drowns one in a turmoil of thought and emotion, with no way out. Ego is the psychic mechanism, a sense of self, of wanting to feel special, perhaps like the centre of the universe, with unusual or unique insights which never occurred to anyone else. One feels like the chosen one, with special skills to show others where they went wrong. There are all sorts of versions of how ego could make one feel infallible, omnipotent, righteous, superior, whatever.... It’s so tiresome encountering someone with a big ego. Make a detour around such people. It’s pointless to even say a word when faced with a huge ego, or a wall of ignorance.

Lohbado discovered most of this after examining himself and seeing the layers of his attachment to himself. The pain of his own confusion caused him to yearn for wisdom. His grandmother taught him about the suffering of ego and that to reduce suffering, he could learn to not take his thoughts so seriously. View thoughts as illusions. Reality is infinite. Vast and profound existence goes way beyond the little existential dramas or emotional upheavals, or dogmatic opinions happening within the confines of one’s ego. Tune into the bigger picture. To do so requires a sense of humour, the ability to not take oneself so seriously and willingness to let go of the many thoughts roaring through one’s mind.