the cat is watching you 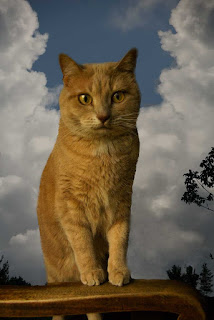 The cat is watching. Katz works for the Catsi, a secret association of cats which gathers information on urban dwellers. The other night, Lohbado watched The Lives of Others, written and directed by Florian Henckel Donnersmarck. The movie features the Stasi, a repressive regime of surveillance which existed in East Germany until the Berlin Wall came down. The movie opens as an agent oozing with evangelical devotion to protecting the state from free thinkers or creative individuals, a man cut off from his emotions, a hardened shell who appears to resent the passion and creativity of the writer's life decides they should keep an eye on a writer.


He takes it upon himself to listen in and gather information about the writer's life. A team of technicians bug the apartment. The agent sits in a room at the top of the building puts on ear phones and listens to everything, from the artist making love with his girlfriend, to chatting with friends at a birthday party, or sitting on the toilet. The setup is creepy. There's nothing more contemptible, vile and mean than people who spy on one another. Spies appear to be motivated by jealousy, self-hatred and hatred for life. If they can't have what the other person has, then they want to hurt the person and destroy the person's happiness.

The Stasi drove many a person to suicide. The writer's friend, a theatre director committed suicide because the Stasi decided his work was too daring, so they ended his career. The suicide shocks the writer. He writes an article on a typewriter, which he conceals under the floor boards and smuggles it to West Berlin. The article describes the high rate of suicide under the soul-destroying surveillance regime in East Germany.

The system is corrupt. Government officials work for selfish motives, to advance their careers. Idealism is merely a hypocritical overlay for brutal self-interest. The film contains a powerful moment of insight or awakening. It begins when the agent takes a copy of a book by Goethe and finds it inspiring. He is completely shocked and startled as he listens to the writer playing the piano sonata received as a birthday present from his friend shortly before the suicide. It's Sonata for a Good Man. The agent is moved by the music. It shocks him into realizing the sheer horror and sleaziness of what he is doing.

I won't give away the story. It's a first class film. Anyone who ever felt the urge to spy on others should watch it.
Posted by Lohbado at 8:20 AM