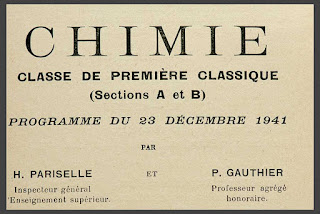 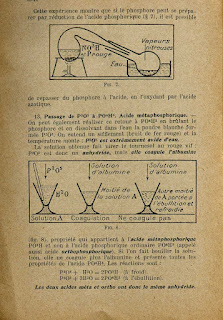 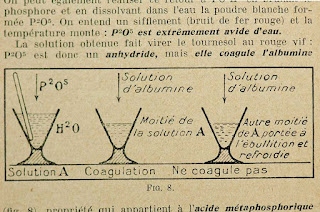 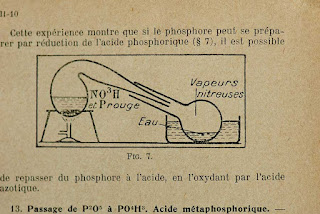 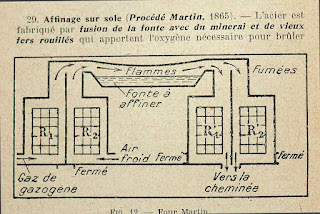 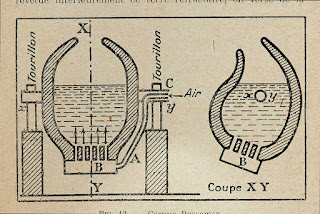 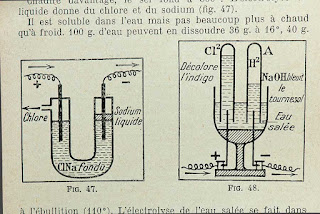 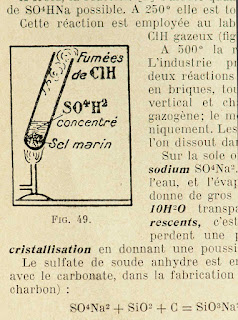 Sometimes to relax Lohbado took books at random from the shelf. He browsed through a chemistry book, published 1941 in Paris by J.B. Baillière et Fils. It's called Chimie: Classe de Première Classique A et B. Lohbado knew next to nothing about chemistry, but enjoyed the diagrams and page layout.


Lohbado didn’t understand chemistry, beyond a basic fascination with phase changes, the cycle of solid, liquid, gas, condensation and crystallization. Chemical reactions involved atoms combining to form molecules. Two hydrogen atoms mate with an oxygen atom to form water. Bodily chemistry might overlap with biology, from sperm and egg, gestation, birth and the whole human condition until death puts an end to it. One rots or is cremated. There’s a mind involved. Brain scientists examine how thoughts could be reduced to neuron firing in the brain, some sort of chemical/electrical activity complete with synapse gaps. If you’re happy, the endorphins or natural opiates are in production to make you feel good. If you’re depressed, maybe your brain is lacking certain chemicals.

Long ago, alchemy was a type of chemistry. Alchemists tried to turn metal into gold. In Ben Jonson’s play The Alchemist, a miser hides his gold in excrement. There’s an ancient association between excrement and gold. Misers tend to be constipated because they can’t bear the thought of even giving away their excrement. Big spenders tend to have diarrhea and so on. The chemistry of eating involves the transformation of food into nutrients and waste. Perhaps this lies at the base of morality systems of good and bad, heaven and hell. Nutrients are good, waste is bad. However, both are necessary. Eating goes beyond good and evil.

There's a kind of psychological chemistry, which also involves phase or mood changes. For example, Lohbado who suffered chronic anxiety would often wake up with a sick feeling in the stomach and a sense of dread at the prospect of having to cope with another day. Sometimes life felt about as pleasant as being in a dentist chair. Lohbado would roll out of bed, stumble about, get the chemicals moving. Eat porridge. Down a coffee. Go for a walk in the park. Movement seemed to dispel the dark clouds in the mind. While walking, Lohbado alternated between sometimes looking at details up close and sometimes gazing down the street, into the distance. The park offered a wide open space in which to gaze at the horizon and into the sky. Soon body and mind felt better, thanks to the chemistry of motion and digestion. Once fully awake, then Lohbado could have fun. Lohbado often repeated what grandmother used to say to cheer him up: You don't have to feel bad. You don't have to apologize or explain, unless you've made a mistake. By virtue of being alive, you have the right to be happy and to have fun. Having fun is not a sin.