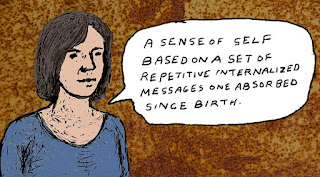 Dr. Jane Wormsly replied to Lohbado's questions about the nature of self. She said one could approach existence with a sense of self-respect and respect for others. Don't harm yourself. Don't harm others. Instead of being moralistic, try to be understanding and compassionate. This doesn't mean one has to tolerate aggressive or psychotic behaviour. It means acting in a kind and reasonable manner.


What exactly is the essence of self? Self could be equated with identity. Lohbado's self involved his height, weight, blood type, address, date of birth and so on. Psychologically, self could involve a set of memories. If a person suffers memory loss, self would be the sense of someone thinking, as Descartes suggested, or the sense of being somebody experiencing things. If challenged to present himself, Lohbado could list his credentials and offer a description of his body. He could also present a resume, listing highlights of his past, various memories and accomplishments. He could describe his hopes and fears. As one undergoes many experiences, many sensations, situations and changes, there's the sense that the thoughts and memories circulate around oneself. Self might be a unified sense of awareness, a sense of being a person.

One's sense of self is mediated or conditioned. A baby learns the mother's tongue, absorbs values and imitates adult reactions, learns from friends, neighbours and teachers at school. One is bombarded with messages from the media. One ingests values, habits and customs without even being aware of it. The culture one is born into could influence how one looks at things. Many of one's likes and dislikes are conditioned responses.

At one point, the baby gives way to the toddler, to the youth, to the adolescent, young adult, adult, middle aged, old person and eventually corpse. If one were to graph the phases of one's life, one would notice a spectrum of changes happening from birth to death. So, if you wished to point to the self on the graph, which life phase would you single out as being the essence of yourself? Or would you say you are everything represented by the entire graph, everything that happened, to the person designated by your name, from birth to death? According to the graph, you are both baby, toddler, youth and so on. If you believed in eternal life, which version of yourself would last for eternity? Lohbado thought it would be nice to have for eternity his body as it appeared at age 19. However, at 19, he was immature He would much rather have the maturity, education and experience he experienced at age 60. He would like to spend eternity in a 19 year old body with a 60 year old mind... so this is all quite silly, which raises the question: is there a single fixed entity which is the essence of self? How would this essence be described? What would be its nature? Is the essence a condensation of everything that happened to someone from birth to death, or is the essence of self something in addition to the physical description and psychological inventory?

It's something to contemplate. A sense of self enables one to navigate through life, to be in society. But the sense or expression of self changes from moment to moment, assuming that self could be separated from how it feels to be oneself or how one's self is expressed. Self can't be identified with any one physical feature or psychological occurrence. So if self, which can't be pinpointed to any one location, changes from moment to moment, what about sense of identity? One has a sense of identifying with something. The thing with which one identifies changes from moment to moment, along with the experience of making identification. At 19, Lohbado hadn't become Lohbado. He was Peter Stumps. He liked rock and roll, going to parties and falling in love. At 60, Peter Stumps faded into the past as Lohbado emerged. Lohbado was highly introspective, shell-shocked from a history of unpleasant surprises, but also encouraged after many pleasant and wonderful surprises and so on... whatever. Who cares? It's no big deal.

Lohbado concluded self is a transparent, porous, open process of being on a trajectory from birth to death. Who or what is undergoing this process? Is there an entity that voyages from one event to the next... ok, on and on, endless questions. It's helpful to contemplate. It could keep the mind open and help one to appreciate the vast and profound nature of being. It could help one pay close attention to what appears to be going on.

If one realized the transparent nature of self, then maybe one would not be so vain, stubborn or opinionated. It would be easier to admit mistakes and to learn if one could function without the barrier of a big ego or a rigid sense of self and an exaggerated self-importance... so... Do the best you can. Be friendly. A sense of humour is essential.