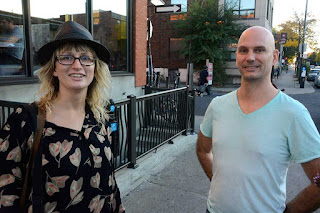 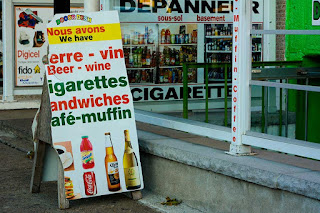 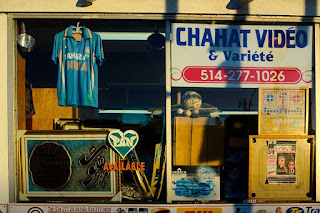 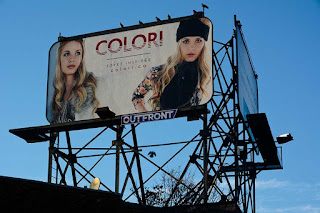 Lohbado enjoyed thanksgiving dinner next door to a depanneur and variety store. Across the street a billboard, inside friendliness and good cheer... Club Morono wishes everyone a pleasant week.


It's fascinating, the variety of elements that make up a scene. Lohbado arrived a few minutes early. The first thing that popped out from the visual field was the monumental sized image of two women, the current monetary ideal of beauty, two women representing the dream of success. May they live long and be very happy! Now how do I smile like that...? Puff the lips out a little; dye the hair; grow it to below the shoulders and you're all set. At street level, signs advertising beer and wine made Lohbado crave a beer. His prayer for beer was soon answered as he enjoyed a pint of Cobra Beer inside the Indian Restaurant. Beside the depanneur was a variety store... It's all there, in parc extension Montreal, an exotic mix of fabric stories, clothing boutiques, restaurants, markets... There's a huge park next to the subway station Metro Parc.... a large open area in front of an old train station facing Rue Jean-Talon.

The background music in the restaurant was loud. One had to talk loud. Some places are a lot worse. They crank up the music forcing people to shout, which is really bizarre. Imagine going out with friends and being forced to shout at each other. Some places keep the music low. A few don't play it at all. The choice of music is usually unpleasant... pop music, lowest common denominator... but then, pop music is called pop because it's popular. So who is Lohbado to complain?

Lohbado stopped listening to music, except on special occasions. Was it like this a hundred years ago? In literary works, for example, in Ulysses published 1922, the characters sing a lot. If one wanted music, people provided it. Recorded music eventually took over, the insidious eternal background music, compressed sonic baby food, clipped highs and clipped lows... an even monotonous tone, interfering with concentration. It got on Lohbado's nerves. Apparently some people like it. One rarely has freedom to choose, when out in public.
Posted by Lohbado at 9:36 AM