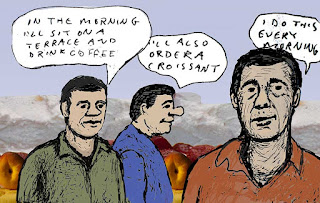 Lohbado used to go for coffee every morning, until the price kept going up to a point where he couldn’t afford it. So instead of going for coffee, he went for a walk every morning. Often he walked past cafes and terraces. He saw people he’d been seeing for years, familiar faces from the neighbourhood.


Changing from sitting in a cafe to walking encouraged Lohbado to get in shape. So much walking and bike riding, eventually it feels good. It’s better to be out and about than cooped up in a tiny apartment. Lohbado’s favourite place to go was the library, although library hours had been reduced. When the libraries were closed, he spent more time walking. Sometimes it’s nice to go into a church, if it’s open and sit in silence.

That’s the beauty of being old, most people leave you alone. There’s not much to envy in a decomposing old guy. It’s fun, aside from the standard set of aches and pains, to get old. As the body falls apart, the mind becomes funky at times. One can look back on life and laugh at the sound and fury. It seemed like such a big deal when Lohbado was young. It’s really not that important. As an old man, the most important thing was to relax and enjoy life, rather than continually fretting over finite, self-based concerns. Of course, easier said than done. The mind has a mind of its own. The mind is subject to freakout, panic attacks and chronic anxiety without warning. But eventually the anxiety subsides, especially as one spends so much time alone. As one gets old, it’s more difficult to connect with people. One ends up alone, most of the time. This alone time is conducive to meditation, contemplation and philosophizing.
Posted by Lohbado at 7:49 AM