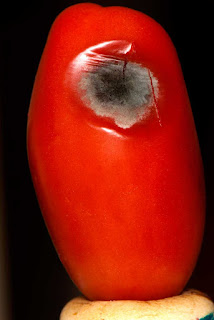 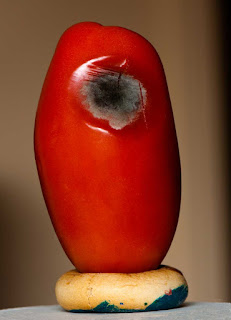 As Lohbado contemplated each fruit of the earth, he noticed a third-eye type mould pattern in the middle of a red pepper. A red traffic light, a warning symbol, pay attention to details. Don't space out. Don't be dogmatic or opinionated. Don't take yourself too seriously. A little humour goes a long way. The earth produces a wonderful variety of unusual plants, vegetables, fruits and flowers. Even a fruit in decay has its charm.


A few years ago Lohbado bought a pile of rotten fruit and vegetables from a local market which used to sell, until it got fined, food that looked worse than what one could find in a dumpster. They would put it on styrofoam trays, wrap it in plastic and sell a pile of rot for a dollar. Lohbado stopped going there. The sign changed. Maybe it has new owners.

The photo of rotten oranges was taken as soon as Lohbado got home from the store. One of the oranges was completely blue with mould. Imagine selling rotten produce! Lohbado bought it for a photo shoot. For a few dollars, he arranged a cornucopia of delightful visual textures, forms and colours.

Lohbado reflected on what he'd read in Ethics, about "passions tristes" and "passions joyeuses" Sad passions are based on inadequate knowledge, when things are unclear. In a passive state, one's mind is obscured. In a joyous state, one has a clear and distinct idea about things. One could feel a sense of beauty, love or a feeling of being blessed. The joyous approach inspires one to action, to live life to the full. Sad passions keep one sealed in miserable, wretched scheming, bitterness, anger, resentment and self-pity. Lohbado felt a sense of poetry and beauty in the French translation. It slowed him down, so he could reflect on the meaning. The text suggested one could choose one's orientation. One could be obsessed with oneself, one's status, self-importance and greed. One's vanity could become a big deal. Vanity could be quite sensitive to the least critical remark or lack of politeness. To be a slave to passion is a passive approach.

With reason, one could contemplate nature. The use of reason enables one to sort things out. One learns to distinguish the difference between emotion, opinion, belief and matters of fact or reason and understanding. The contemplation of physical and mental objects could lead to an understanding and appreciation of the infinite. It's like poking a hole in the claustrophobic bubble of endless chatter and drowsiness rotating about the core of self-centred concern, the attempt to protect oneself against real or imagined enemies, to stake out a territory and so on. Instead of waking up in the morning and feeling miserable about the struggle to make it through another day, Lohbado gazed towards the distant horizon and contemplated infinite nature, the earth, sky and everything in between. Instead of feeling like a prisoner, Lohbado could identify with the coming and going of each day, or each breath, people being born, people dying, cycle of the seasons. A fruit is fresh, then wilts and could spoil or become mouldy. In the spring, fresh plants will grow.

Maybe the blue circle of mould on the red pepper is like a warning... don't waste your life. You won't live forever. Forget petty concerns and self-centred jealous bickering and aggression. It's helpful to adopt a kind and reasonable attitude.
Posted by Lohbado at 10:54 AM