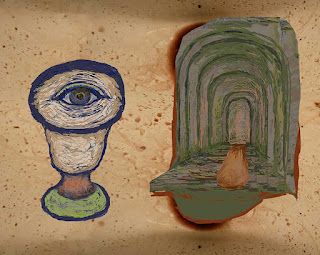 Thought and extension are two modes of the infinite substance of nature, according to Spinoza. Extension means physical things have a shape, which takes up space. Thoughts are invisible. Within the mind, intellect organizes a coherent picture of reality. The understanding is able to sort out sense-illusions from scientific fact. An astronomer is better equipped to describe the sun than someone who holds their hand in the sky and notices that one’s hand appears to be the same size as the sun. The senses could be misleading, inaccurate or unreliable, even though they’re only doing their job. The intellect is able to discover abstract universal truth, for example, all sides of a triangle add up to 180 degrees.

Descartes equated matter with extension in separation from mind in his Meditations. Body and mind were two separate things. This reflects an old tradition going back to Plato. Socrates, in his last dialogue Phaedo, compared his body to an old hotel room, where his soul felt imprisoned. He was happy to die, because death meant his soul could be released from the prison of the body. Spinoza rejected this duality. Spinoza described thought and extension as modes of a single substance and in doing so, solved the body/mind dualism of Descartes. Dualism fails to adequately explain the interaction of body and mind. Descartes tried to locate the point of mind/body interaction in the pineal gland, a walnut-sized gland at the base of the brain, just above the spinal cord. There was no scientific verification of this theory.

Spinoza viewed body and mind as being two attributes or expressions of the one substance of infinite nature or being. He used the word God. His usage of the G word is open to interpretation. He had already been stabbed in the back for philosophizing. He wrote Tractatus-Theologico-Politicus which contains an explanation how philosophy, far from being a threat, could make a positive contribution to humanity. He didn’t dare publish Ethics while alive. Deleuze suggested Ethics could be read as an ontology and that God could be translated as infinite nature. The Greeks defined the substance of being as ousia. Substance is all that there is. Substance entails infinite attributes and modes.

In the twenty-first century, brain research locates mental activity as a series of nerve fibres and neurons firing. Some researchers even hope to locate brain states responsible for awareness. It’s fascinating to contemplate mind and body interdependence. When the body relaxes, the mind slows down. When the body is jumping about or under pressure, the mind is quite likely to be active. It’s interesting to ponder how thoughts, which are invisible and virtually impossible to pin point, could result from physical matter. But then physical matter is a highly active universe of atomic particles which appear to divide to infinity.
Posted by Lohbado at 10:49 AM