view from a reading room 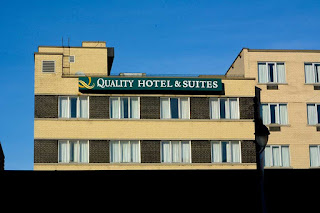 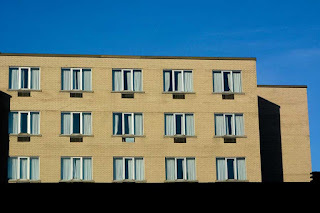 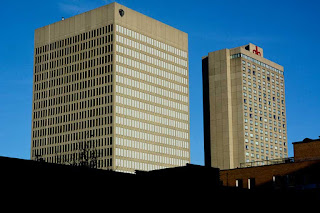 One of Lohbado's favourite places to visit is the Grande Bibliothèque, a large library near metro Berri-Uquam in Montreal. There are many places within the library to read or study. Lohbado often gazed out the window of a reading area to see the buildings in the above photos. The bus depot is across the street, a Quality Inn plus a mix of other apartment towers, hotels and office buildings.


Lohbado read some more Spinoza. His books require a slow and careful reading. The ideas gradually unfold. In Ethics, Spinoza creates a system of harmony based on reason, a system which dispenses with hypocritical morality systems of good and evil. Reason is able to discover a clear and distinct idea about things and to understand a human's position in the universe. Humans are an inseparable part of nature. Nature exists because it exists. It exists infinitely, without a goal. The human view was that nature was created to serve humans in their quest for greater pleasure and power. The idea of a last judgement and apocalypse, or the end of time was a projection of human psychology on to nature or being.

Desire motivates humans. Desire could be useful or harmful. There are joyous desires, such as yearning for knowledge, beauty and truth, or for whatever will improve one's existence. There are sad or miserable passions, such as jealousy, greed, selfishness and lust for power. The reasonable approach would be to cultivate desires leading to harmony and peace of mind and to not wallow in miserable states of mind. Pettiness, resentment and jealous scheming perpetuate misery and conflict. Conflict grows and eventually manifests as war, destruction and atrocity.

People sometimes exploit and profit from human foibles. Authority figures could proclaims ways to win divine favour. They invent a god that wants to be worshipped and who enjoys sacrifices and offerings. Religious officials could exploit this for personal gain. A whole morality system could be established to create authority and control. Leaders proclaim that if you do what they teach, you will be good. If you don’t do what they want, you are bad. God favours those who are on our side. Those who disagree are evil. God is with us when we conquer evil nations and steal their resources. We do so for the glory of God. Nations who resist conquest are infidels, savages or barbarians. That’s how it goes, the hypocrisy of morality. Morality is a behaviour control system based on vested self-interest. Good is that which furthers the interests of the dominant group. Bad is that which protests against being controlled or enslaved, or which is different. Spinoza had personal experience of this, as he philosophized in danger of his life, during an era of religious persecution and intolerance.

Spinoza argued for a system of ethics, rather than a system of morality. Ethics is based on reason. It’s reasonable to create harmony. It’s irrational to promote destruction and war. Next Lohbado planned to read Tractatus Theologico-Politicus where these themes would be elaborated. First he wished to read Ethics one more time. These books are at the big library.

This is just a story, the story of Lohbado, a text for nothing and for everything. The story of an old guy riding his bike to the library, taking the elevator up to a reading room and enjoying beautiful literature or philosophy. From time to time he paused to gaze at the monolithic masses sticking up into the sky. Sometimes it felt like being in a dream. The dream could be good or bad, depending on how you look at it. One’s identity is finite. One will eventually be a corpse. However, while alive, during the trajectory from birth to death, one could identify with infinite nature. Infinite nature has no limitations. There is unlimited potential to grow and flourish, like a flower. Enjoy the perfume and vivid colour. It could be a joyous experience. It could be unpleasant if you insist that a particular flower last for eternity.
Posted by Lohbado at 10:32 AM