writing with the camera 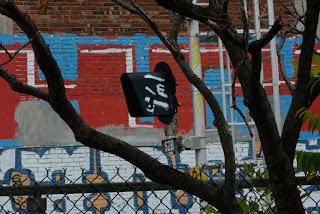 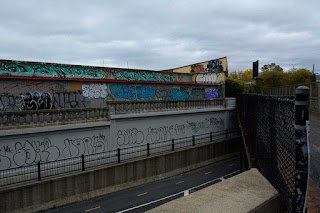 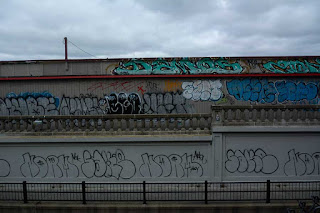 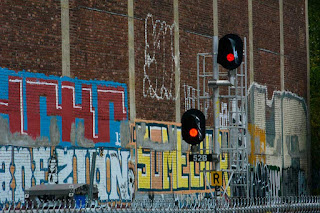 Just about everyone walks around with a picture-taking device. The romantic days of the lone photographer are over. Lohbado met with lots of people taking pictures, of similar subjects, as he went on a bike ride and took photos along the way. Lohbado viewed this as a positive state of affairs. The camera could be viewed as a pen. Picture taking is a way of writing. The story occurs as a sequence of images. Lohbado enjoyed abstract lines and shapes. It's strange how someone might react negatively to a Kandinsky or abstract painting and say: "What is it? I don't get it?" Whereas if you take photos of shapes and forms, those questions don't arise. The only difference is the photo has a label, ie, a picture of Van Horne Warehouse, whereas an abstract painting might dispense with the label and present the colors and forms as a visual composition.
I met Lohbado while he stopped to eat a piece of rye bread and cheese. He showed me the above images and explained that the top picture has strong dark lines rippling across a highly saturated background. He enjoyed the variety of line, for example, the spider thin lines of the brick wall, the diamond pattern of the chain-link fence, the heavy block mass of the signal light.

The two images of the graffiti wall under an overcast sky evoked memories of when he lived years ago in Halifax. The scene reminded him of cold windy days at the edge of the ocean. The bloated graffiti shapes brought back memories of huge boulders thrown up on shore during Atlantic storms. The horizontal rails or fences reminded him of ocean liners, or fences along the sea walk to provide safety. Sometimes waves could surge dangerously and sweep a person into the sea. With or without the mental associations, each scene impressed Lohbado. He got off his bike and took a photo as a way of connecting with the moment and evoking mental or aesthetic experience, aesthetic in the sense of appreciating the infinite richness of the scene.
Posted by Lohbado at 10:23 AM