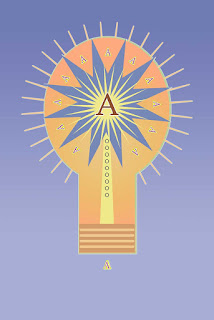 After crossing the Plains of Radiation and settling in Yamaville, Lohbado studied the Book of Oogah, as well as books on the Moronovian Temple reading list. Lately he’d been reading Spinoza’s Ethics. It required more than one reading to fully appreciate the unique beauty and structure of definitions, explanations, axioms, demonstrations, scholia. If one did a diagram of connections, a triangle would appear. The eternal triangle, the angles always add up to 180 degrees.

Mathematical truth goes beyond the limitations or illusions of the senses. The venerable senses provide material for the infinite mind to enjoy. The mind and material, or thought and extension are attributes of the infinite substance of nature or all that there is, or being.

Lohbado remembered contemplating triangles as a boy, when he was Peter Stumps. He remembered sitting in a room at the church of Rev. Woodlot Stumps, Church of the Living Monument. A window provided a view of a huge cast iron trestle bridge across the entrance to the bay, where Roaring River entered the harbour and marina area. The dam up river slowed the river so it no longer roared. It generated electricity.

Peter Stumps drew an image of the bridge, pencil on paper. He tried to separate out shapes of the bridge, then represent them on paper. His eye got lost in the complex pattern of iron beams crisscrossing to form triangular shapes. Metal beams stretched diagonally from corner to corner of rectangles. He gazed high at dark iron lines, trellis work against a blue sky in July, the day before his tenth birthday. The forested escarpment and granite cliffs amplified the mellow hum of a sea plane. Planes regularly landed and took off. Sail boats, motor boats, yachts, and freighters... as a boy he remembered walking on the pier and gazing at the giant metal hull of huge lake going ships.

When Peter returned about twenty years later, after becoming Lohbado, a local told him to go back to where he came from. Lohbado told him he was born there. The man said, “That was years ago. This is no longer your home. This place is not the same. There’s nothing for you here.”

The man was afraid Lohbado was looking for work. He said, “There was a job vacancy yesterday. Today they hired somebody. There are no jobs here for outsiders.”

The local went out of his way to make sure Lohbado didn’t feel welcome. Lohbado assured the man he would be leaving on the afternoon train and wouldn’t come back to his birth place unless he became wealthy. It used to be a lumber town. Logging companies razed the white pine forest. The town became a resort. There’s money in beauty.

Before leaving town, Lohbado walked to the end of the concrete pier and gazed across turquoise water, past the forested islands towards the horizon. He sat on a green wooden bench and gazed up at the sky, into clear blue. There was no shape, no visual reference point, no centre or edge. Nature exists without a goal, without need or desire. It just is.
Posted by Lohbado at 9:30 AM