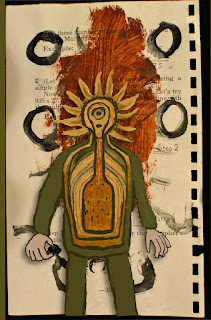 A creature evolved from one of Lohbado's painted books. It began with a gut feeling, a sensation in the stomach. The stomach is like an alchemist oven. One transforms substances and sorts them out into nutrients and waste. Maybe this is the basis of moralistic duality, of good and bad. If one could see through the moralistic screen, in fact it's all worthy of respect, the process of being alive. Body and mind are two modes of the same substance, which is being, or nature. One occurs as the result of a natural process, the lust of a man and woman, sperm and egg. A creature is born and grows to adulthood and eventually becomes a corpse. If one could tune into the larger picture of nature and the infinite, one could get beyond feeling good or bad about the limitations of one's body or mind. On one level, body and mind are made out of the same substance as the infinite. However, body and mind are finite occurrences, like a musical performance, but music is infinite.